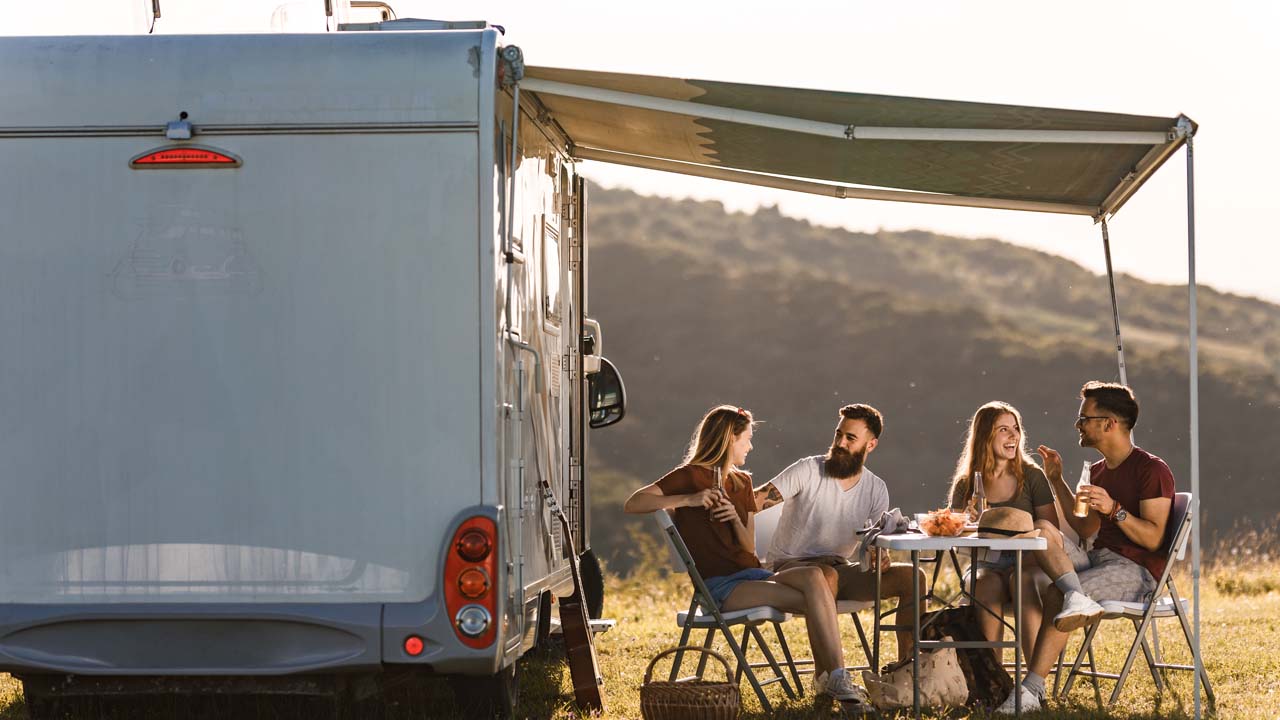 Caravans are seeing massive gains, up by 50% in some areas, as Aussies look to explore their own backyard. We find out from an industry expert about the caravan-craze.

Caravans are appealing to more Australians than ever before, with ‘grey nomads’ not the only ones showing a keen interest.

We take a look at the current state of caravan demand in Australia, and the buyers behind the recent surge.

The caravan industry in Australia

At over $23 billion, the caravan industry is not small in Australia and the numbers are increasing.

Sunrise Caravans director, Steve Andonovski, says there are a few contributing factors to the recent resurgence.

“We’ve seen massive gains across the board, over 50% increases from previous years. Young families are embracing caravans in droves.

“I think it really integrates with the Aussie lifestyle. Queensland, for example, has a lot to see in all directions so being able to move freely has been a great boost to the regions.

“As an indicator, people need to book caravan parks well in advance to secure a site, especially during peak season.”

“We’ve seen a big boost across all categories, motorhomes, campers, really the whole industry. An important factor is that unlike in the past, people aren’t relying on traditional caravan parks as much, modern lithium batteries allow for off-the-grid experiences.”

As seen below, steady growth has been recorded for several years, with the last 12-18 months in particular capitalising on economic conditions. 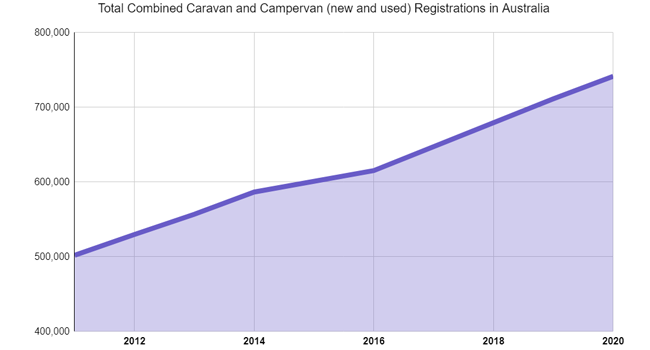 Many are aware of grey nomads, Australia’s army of caravan-equipped retirees traversing highways. The group has traditionally made up a large portion of buyers, and while that’s still the case, the overall growth of caravans has been superseded by other demographics.

Steve has seen first-hand the shift in new buyers in the market, from newly weds to tradies. The caravan life has also been well documented among Instagrammers, homeschoolers and bloggers in recent times.

“In previous years, our ideal customer was a retiree aged 60+, using savings to get into a caravan – that’s all changed.

“The majority of our customers today come from a much younger generation which has resulted in us moving a few family caravans per year in the past, to well over 100 in the last 12 months.

“It’s this group who are jumping online to share their experiences and spreading the word to a larger audience.”

There are a few reasons why caravanning appeals to more Australians

The popularity isn’t just a side effect of the pandemic.

One of the reasons is equipment modernisation. Even budget options today come with sophisticated electrical systems to include, reverse-cycle A/C, kitchen appliances, device charge points and WiFi where available.

SUVs and utes, which make popular towing rig choices, are big sellers in Australia with SUVs claiming 49.6% of the new-car market during 2020.

The table below shows power increases in three of Australia’s most popular towing rigs.

Today’s road trip enthusiasts typically have a vehicle capable of towing, and caravan products can be tailored to match tow capacities. The popularity of large American pickups on Australian roads also allows for big ticket caravans, like fifth wheelers.

Australia’s Highway 1, the world’s longest national highway, which circumnavigates the country, only became 100% sealed in 1989, meaning prior to this, some sections were gravel.

The country’s huge number of caravan parks is only increasing, as are the amenities. Most modern parks feature pools, playgrounds, activities, BBQ areas and affordable prices for powered sites.

Things attractive for the growing number of young families replacing ‘flights and accommodation’ with highways and caravans.

As Steve’s customers often point out, getting on the road in a caravan has many attractions.

“I’ve seen a lot of purchases from people reluctant to go overseas. Australians want to take holidays, but safely. This has resulted in a big push to see our beautiful country.

“For example, a couple recently purchased an off-road caravan with $60,000 worth of savings they had put aside for an overseas trip. After experiencing breakfast, lunch and dinner 20 metres away from an Aussie beach, they reached out to tell us how much they loved it.

“This couple represents a large number of people who have diverted overseas holiday plans into caravans and really had their eyes opened.”

The impact of COVID

COVID has naturally had an effect on caravanning in Australia. Prior to the pandemic, Australians spent around $60 billion on international travel each year, however with borders sealed, Australians have had to look local for their holiday getaways.

Some of this spending has found its way to caravans and towing vehicles.

At first, lockdowns caused supply chain disruptions but as Australians have come to accept and deal with COVID, demand is outstripping supply.

“Typically we see waiting times on new caravans from 8-12 months and, in some cases, 18 months. Before the boom, waiting times were around 3 or 4 months max.

“I’ve spoken to at least ten newbies recently who have all commented on how much they love the lifestyle and won’t head overseas when borders open. It’s this attitude that is pushing the demand up.”

Can the good times last?

With international borders (slowly) beginning to open, albeit with heavy restrictions, some demand could subside. However, many now have a taste for caravanning.

Mr Andonovski too remains optimistic about the industry’s future.

“I believe the industry will remain strong. We might see small drop off when borders open up, but I think it’ll be short lived.

“Many people new to caravanning have embraced the lifestyle and this foundation will stick. We have a huge country to explore.”

If you have clients interested in caravan finance, it pays to know products they might be looking at.

Conventional caravans: The typical type of caravan that most people think of when they imagine one. Four solid walls at full height and come with one or two axles.

Fifth-wheelers: Typically the largest sized caravans available. They require a powerful, high-torque tow vehicle. Due to their large size, some caravan parks are unable to accommodate fifth-wheelers.